I’ve owned this old paperback copy of Thus Spoke Zarathustra since the late 1970s. Ever since then, it has been my constant companion.

It was this very book that first awakened me to the pleasures of reading philosophy and the possibilities of doing philosophy, when I was still innocent of all serious philosophy.

I do not know why I first bought the book — it was not exactly recommended reading in the public high school I attended — but I seem to remember that I first read Zarathustra on a hiking trip in the Black Mountains. I know that it was night and there was a fire burning.

Was it The Stillest Hour? I would like to think so. I was reading by candlelight, when the words of Zarathustra’s Prologue leapt out at me. I’d never read anything like this! Whose words were these? In an uncanny way they seemed to be mine — or at least I wanted them to be mine. I couldn’t say I understood them fully but knew those words to be true and I wanted to live their truth.

So I dripped wax on the page, to mark it. 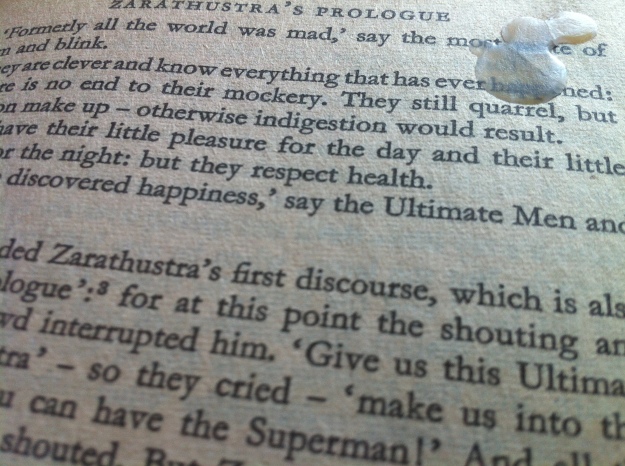 I left my mark in wax — as if I could make these words my secret, as if sealing a letter with wax. A letter, but to whom? To Nietzsche? More likely to myself, promising I would return.

It was just the first, not the last time that the beauty, the passion, the madness and the truth of Nietzsche’s writing in Zarathustra struck me, stopped me in my tracks, overcame me. But I believe it was at that moment that I began to tell a new story about myself and about the world, or at least it was one of the first times I understood that I might have a story to tell. I was 17 years old.

Now, I have little claim on Nietzsche. I am not a professional philosopher and I am not a Nietzsche scholar by any stretch of the imagination. I once wrote a few words about Untimely Meditations in a review of a book by Bernard Williams; and when, in the 90s, I included Nietzsche in my Western Civilization courses I usually taught The Birth of Tragedy or The Genealogy of Morals. But curiously enough, I never taught Zarathustra or wrote about Zarathustra, which of all Nietzsche’s writings has arguably — no, undeniably — had the strongest claim on my life and my imagination. The book has done its quiet, subtle work in my life for nearly thirty five years.

“The dew,” Nietzsche writes, “falls upon the grass when the night is most silent.”