Energy derived from sources like the sun, air, and water, on the other hand, is imbued with immense liberatory potential. In principle every house, farm, and factory could free itself from the grid by generating its own power. No longer would power lines and gigantic, leak prone tankers be needed for the transportation of energy; no longer would workers have to toil in underground mines or remote deserts or rough seas; there would be no need for the long supply chains required by fossil fuels. (Amitav Ghosh, The Nutmeg’s Curse, p. 102, emphasis mine)

Context makes it clear Ghosh is thinking of coal mining, oil fields, and offshore platforms when he dreams of a world where workers no longer toil. But in his reverie, Ghosh neglects an important and undeniable feature of renewable energy: it is mining intensive.

The IEA sees demand for critical minerals surging from 2020-2050 even as the demand for and value of coal drops. In green growth scenarios, workers will likely have to keep toiling in mines as they now do in Chile’s Atacama desert, the cobalt mines of the Democratic Republic of Congo, or the copper and nickel mines of South Asia, South America, or Siberia. The list of potential sacrifice zones will grow and could someday extend from American public lands to offshore oil platforms converted to deep-sea mining.

This observation is not an argument against the transition from fossil fuels. It’s just to say that right now there are no signs the shift to renewables will undo the resource curse. Extraction for global markets continues to exact a local toll: serious human rights violations, unremediated (or irremediable) environmental destruction, conflicts over water (which Ghosh himself mentions briefly in a list of “conflicts that global warming will create or exacerbate,” p. 127), and social division. And for the foreseeable future, mineral supply chains will be nearly as long as those required by fossil fuels, strung across the globe and fraught with geopolitical tension.

A decisive shift from fossil fuels could see the end of the petro-dollar and the toppling of “global hierarchies of power,” as Ghosh imagines: “The liberatory potential of renewable energy has a very important international dimension as well: if adopted at scale it could transform, indeed revolutionize, the current global order” (p. 103). It could also precipitate another set of crises – environmental, humanitarian, and military — and it’s worth considering that eventuality.

The latest release of Boundary Waters documents arrived today, a 14th supplemental production in response to my FOIA lawsuit v. the Department of the Interior. I’ve put them online here.

Two things caught my attention right away: first, an inventory of documents the Solicitor’s office at the Department of the Interior put together, apparently in connection with the Voyageur litigation. A short Twitter thread calls out some items of interest.

These records suggest the Solicitor had those very 1966 news articles at hand, but chose not just to ignore but to deny outright what they said about the production requirement.

(I wrote about the Solicitor's selective use of evidence here: https://t.co/rFo2AomRWh ) pic.twitter.com/1pbWKA9y7N 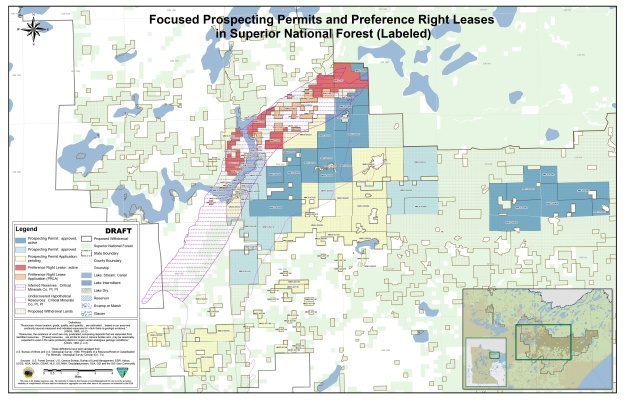 There are already a significant number of active leases and many more in the application stage that could eventually come online.

The purple plume of inferred and hypothetical reserves of critical minerals is especially noteworthy here.

We know from other documents I obtained that political appointees in the Solicitor’s office intended to position Antofagasta’s mine as a source of critical minerals; and after the Trump administration published a new list of critical minerals in 2017, Antofagasta itself even flirted briefly (in its 2017 Annual Report) with the notion that Twin Metals had significant cobalt reserves.

The Biden administration is currently reviewing the actions the Trump administration took on Twin Metals and — maybe just as importantly — they are undertaking a review of the critical and strategic minerals supply chain. If it were to be fully developed, that purple plume of hypotheticals and inferences could become a real-world industrial corridor.

Update, 12 May 2021: According to a May 10 Settlement Agreement in Center for Biological Diversity et al. v. Mitchell Leverette et al. (a case in the US District Court of the District of Columbia), the Bureau of Land Management will review its May 1, 2020 decision authorizing the extension of 13 of the prospecting permits indicated on this map. The renewals were made without an Environmental Assessment under NEPA or an effects determination under the Endangered Species Act. These thirteen prospecting permits are for all intents and purposes suspended until BLM completes its review; Antofagasta agrees not to engage in any ground disturbing activities. Antofagasta’s two mineral leases are also under review at Interior and USDA, and we can expect some news on that front in the June 22 filing in Wilderness Society v. Bernhardt.

New Boundary Waters documents arrived yesterday. I posted a short thread on Twitter as I reviewed them.

These records traverse familiar ground. Most date from January, 2018, when attorneys at Interior were preparing letters notifying the Forest Service and Twin Metals that the Solicitor’s Office had reversed the Obama administration.

For Twin Metals, this would mean that the Department of Interior had rescinded its rejection of their application for lease renewal. Not a green light — that would come more than a year later, in 2019 — but an encouraging sign of new and friendly disposition. For the Forest Service, the reversal would send an early signal that the two-year mineral withdrawal study would either have to favor renewal of Antofagasta’s leases (unlikely), or it would have to be cancelled if it were going to stand in the way of renewal. The issue raised questions about compliance with NEPA, as one heavily redacted exchange suggests: 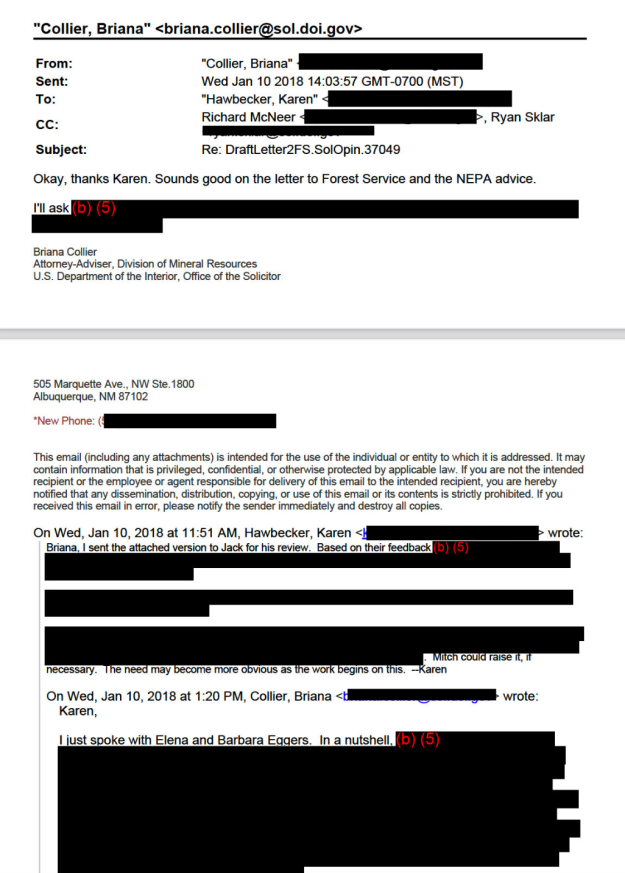 It would be helpful to know more about how these attorneys saw the problem with NEPA at this time, especially when evaluating the action then-USDA Secretary Sonny Perdue in September of that same year, when under political pressure he abruptly cancelled the planned study.

The document trail invariably takes us back to that critical decision. It deserves careful and comprehensive review. There was some movement in this direction yesterday, when Senator Tina Smith wrote to Perdue’s successor at USDA, Tom Vilsack, and Secretary of the Interior Deb Haaland to ask that the BLM and Forest Service to start a new mineral withdrawal and segregation process and resume the study Sonny Perdue interrupted.

Smith’s letter calls for a return to science but recommends a more limited review than the situation warrants. She wants the agencies to determine whether copper and nickel can be “safely” mined in this area, and she also wants to present herself as a champion of Minnesota mining. It’s a move she seems to have learned from Amy Klobuchar.

Be that as it may, Smith offers Vilsack and Haaland one way forward over the next few months, during the court-ordered 90-day stay in Wilderness Society v. Bernhardt.

We must protect our precious wilderness. At the same time, we must pursue opportunities for both recycling and responsible mining of important mineral resources in the United States. If you believe—as I do— that the United States should lead the way in creating a clean energy future, then we must support public policy which allows for responsibly mining the minerals that this future requires. It is irresponsible and unethical to outsource exploitive [sic] labor practices and environmental degradation to other places while we reap the benefits. However, copper-nickel mining is not right for all places. There are some places too sensitive to mine. This is why we the [sic] mineral segregation and withdrawal study is so essential.

The letter simultaneously recommends precautions for the Rainy River Watershed and “responsible mining” to build “a clean energy future.” Those two things aren’t necessarily incompatible, but it’s unclear how this statement translates to coherent rule-or decision-making. It’s also the same line on mining that Secretary of Energy Jennifer Granholm has taken in recent public statements. How will the new administration determine what responsible mining for the clean energy future looks like? That is going to take some difficult conversations, but it’s not an issue Granholm, Vilsack, and Haaland can or should put off for very long.

T. Boone Pickens announced today that he has decided to put his Texas wind farm plans on hold.

The story identifies a few different causes for the suspension: natural gas prices (down 5%), the recent drop in oil to $55.77 as well as the estimated $2 billion Pickens’ own investment firm lost this year.

I leave it to others to say what this setback, or slowdown, or suspension means for the Pickens plan and the momentum that’s gathered around the plan.