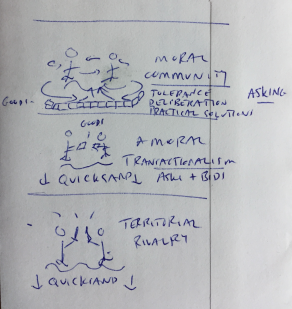 A few thoughts on the drawing I made yesterday morning.

One amoral transactionalist or another in my drawing might try to accumulate sufficient goods — in this case, enough flooring: planks, paving stones, rebar, etc. — to shore up only his patch of quicksand.

As he watched his trading partner and his fellow man sink, he might realize that he has done himself out of the trade that sustained and defined him.

He might also find that he needs the other guy after all, as it’s very hard to lay planks across one area of quicksand without building up another. (The best design would go to the very margins of the whole patch of quicksand, and anchor the floor in terra firma.) He has won only as much land as his transactions to date have secured for him. Once his trading partner sinks, he has made his last acquisition.

Even if their trade observes some rules, it will be short-lived unless they recognize that the patch of quicksand they’re standing on needs shoring up and maintenance. When the pair recognize that they share common ground, and a common future, they have a much better chance of keeping themselves from sinking.

With that recognition, they have already crossed over from amoral transactionalism into some sense of common life or mutual standing. They can start working together, or start coordinating their efforts: they might decide to tax their trade so that they can direct some of the goods toward building a shared foundation.

Do the pair locked in territorial rivalry have any future? One might prevail over the other, raid his stores of goods and make plans to occupy the entire territory. He could even enslave him or coerce him to build a stable platform over the quicksand patch.

It’s a future from which both parties should recoil in horror. At the very least they might understand that, all things being equal and luck being what it is, committing to this course means that one of them will end up dead or suffering under the lash.

And the best the winner of such a contest can hope for is the master’s fate: he will never be truly respected nor have standing as a person (which can only be granted by another person; but he has deprived his rival of that standing). He will have lost even that bitter sense of “we” that he knew in the days of territorial rivalry. Now he can only make the vanquished party hand over his goods, do his bidding, cower in fear or howl in pain.

From “The Difficulty of Tolerance” in Toleration. An Elusive Virtue:

Any society, no matter how homogeneous, will include people who disagree about how to live and about what they want their society to be like. (And the disagreements within a relatively homogeneous culture can be more intense than those within a society founded on diversity like the United States.) Given that there must be disagreements, and that those who disagree must somehow live together, is it not better, if possible, to have these disagreements contained within a framework of mutual respect? The alternative, it seems, is to be always in conflict, even at the deepest level, with a large number of one’s fellow citizens. The qualification “even at the deepest level” is crucial here. I am assuming that in any society there will over time be conflicts, serious ones, about the nature and direction of the society. What tolerance expresses is a recognition of common membership that is deeper than these conflicts, a recognition of others as just as entitled as we are to contribute to the definition of our society. Without this, we are just rival groups contending over the same territory. The fact that each of us, for good historical and personal reasons, regards it as our territory and our tradition just makes the conflict all the deeper.