This letter is with regard to land owned by the State of Michigan on the Yellow Dog Plains and next to the Yellow Dog River in Michigamme Township, Marquette County (40 acres, NE1/4 SE1/4, Sec.13, T50N, R29W).

As you know, in a 2003 review, this 40-acre parcel was designated “non-development” by former Fisheries Chief Kelley Smith. Fisheries biologist George Madison, who works out of the Baraga office of the DNR, reversed Smith only this year. It is unclear why, and I urge you to look thoroughly into the matter as part of your review and clarify for the public whether and on what grounds the DNR thinks Fisheries’ reversal of its position on this parcel should stand.

Madison himself says that he was unable to tell why Smith had placed the non-development restriction on the parcel in the first place.

For some reason Kelley Smith (former Fisheries Chief) had placed a non-development restriction recommendation on this parcel during an 8-21-2003 review. Indeed while there is no water or aquatic resources on this parcel, with care and respect for the 2003 review I carried Mr.Smith’s recommendations forward in case there was an element of uniqueness to this parcel that we are not aware of.

For this 8-12-2014 review, I have changed Fisheries Division’s recommendation to “development” with no restrictions.

What reason did Kelley Smith have for restricting development on the parcel? Madison cannot say, and in May of this year Forestry Supervisor Jeff Stampfly admitted he, too, was “at a loss” when it came to accounting for Smith’s review. But then they both recommend its reversal.  Both Stampfly and Madison seem to suggest that Smith was simply mistaken, or at least they see his 2003 review as problematic. What exactly did Smith say? Isn’t it possible that Smith discerned some “element of uniqueness” here that Madison and Stampfly are unable to appreciate? The prudent thing would be to find out.

To that end, the DNR should publish Smith’s August 2003 review — undertaken before the mining boom had really gotten underway — and take what Smith says there under advisement. To help clarify things, Smith himself (now in retirement) should be interviewed about the parcel and what, if anything, makes it unique or deserving of non-development status, and his statement entered into the public record. If Smith and Madison still disagree on the status of this parcel, then that disagreement should be aired publicly and accounted for in whatever report you file. The public deserves this measure of transparency.

For his part, Madison could state more clearly why he reversed Smith in this 2014 review and did not do so previously. Why proceed with “care and respect” for Smith’s review, then suddenly change course after Lundin Mining shows interest in the parcel? Madison seems to be arguing in his comment that Fisheries should place no restrictions on the parcel because he can identify “no water or aquatic resources” directly on the parcel; this seems to be Stampfly’s position as well. But the Yellow Dog River is only a few hundred feet away from the boundary of the proposed site. Maybe, for Smith, that proximity was enough.

As Smith may have known, there are a number of ways in which industrial development on this parcel might seriously compromise the Yellow Dog River. Groundwater flow in the glacial aquifer underlying the Yellow Dog Plains would make it difficult to limit water contamination from drilling to the parcel itself. Even a well-run drilling operation will see lapses: Yellow Dog Watershed Preserve has “photo documentation of ripped sump pit liners, drill bit wash basins that are overflowing, and broken fences” from the exploratory drilling done for the Eagle Mine. Exploratory drilling is also bound to require some roadwork and other infrastructure build-up on the Yellow Dog Plains, and it will increase traffic to and from the parcel. That, too, puts the Yellow Dog River at risk. 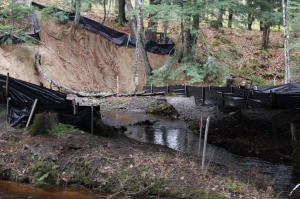 Roadside mitigation efforts in October of this year. The Eagle Mine haul route has already put the Yellow Dog watershed at risk and contaminated the Salmon Trout River.

As you are no doubt aware, just this past summer, a road crew working on the Eagle Mine haul route ruptured a perched groundwater seep, dumping sediment and releasing turbid water into the Salmon Trout River, in violation of the Natural Resources and Environmental Protection Act. Mining’s risks never end at the mine’s gate.

In closing, I urge you to take your time looking into the confusion over Smith’s 2003 review and all other questions and comments you receive regarding this parcel. One newspaper account I read has you saying that you intend to finish your analysis by January, having received written comments from the public only a month before that. Wouldn’t it be better to allow time for follow-up interviews or requests for further information? I trust that you and the DNR do not want to give the impression that this request for public comment is merely pro forma, and want to do the right thing by the public you serve.