This month’s release of Boundary Waters documents in response to my FOIA lawsuit may only number 19 pages, but it helps highlight an important point, one I have repeatedly made when writing and speaking about this issue: reviving Antofagasta’s expired mineral leases in Superior National Forest was a top priority for the incoming administration.

We don’t know why.

The July release shows officials at BLM revisiting the proposed mineral withdrawal in Superior National Forest much earlier than previously known. On January 25, 2017, Richard Cardinale and other Interior staff meet to discuss a correction to the Federal Register. The original notice of the proposed two-year mineral withdrawal incorrectly stated January 21, 2017 as the end date (which would amount to a two-day, not a two-year segregation period). This seems like straightforward, conscientious work.

Two days later, on January 27, 2017, just one week after the inauguration, political appointee Daniel Jorjani seizes on this briefing and forwards it — at 4:48AM — to Katharine MacGregor and Kathleen Benedetto. 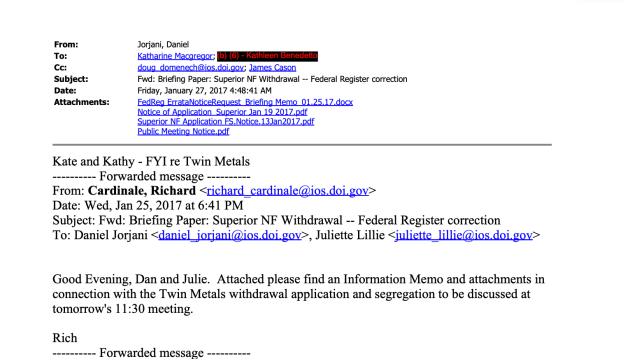 It’s clear that the trio has been discussing Antofagasta’s Twin Metals project in northern Minnesota. Why the routine publication of an errata notice in the Federal Register should have excited them, or how it might have served their ends, remains unclear.

But this Jorjani email appears to have gotten the ball rolling. MacGregor requests a list of all public land withdrawals and segregations made in the last year of Obama’s presidency, which Michael Nedd dutifully prepares and delivers on Monday, January 30.

We know from the timeline that by Thursday of that same week, February 2, Kristin Bail is putting together a briefing for MacGregor on Antofagasta’s leases near the Boundary Waters. I am unable to say whether other segregations and withdrawals on Nedd’s list were dealt with so zealously.

It seems safe to say that the business interests of a Chilean conglomerate took precedence over a whole lot of other matters at the Department of the Interior in the first weeks of the Trump administration.

The new documents are here.