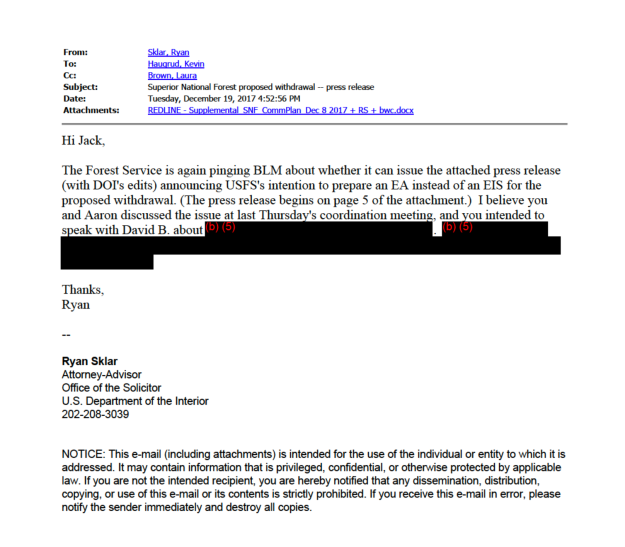 “Again pinging BLM”: in 2017, the US Forest Service appears to have been concerned over what standards of environmental review applied to the proposed mineral withdrawal in Superior National Forest.

A new set Boundary Waters documents arrived yesterday. This is the latest monthly installment in a “supplemental production” of responsive records the Department of Interior agreed to make after I sued for failure to comply with FOIA. This batch includes 378 pages, pretty thoroughly redacted. I’ve put them online (1,2, 3, along with the rest of the Boundary Waters documents I’ve obtained) and started to go through them.

Their arrival might be timely. Some of the records show officials at the Department of Interior trying to decide on appropriate standards of environmental review as they work on renewing Chilean mining giant Antofagasta’s mineral leases in Superior National Forest. That is a question at the heart of a new lawsuit filed at the start of this month in US District Court for the District of Columbia.

Wilderness Society et al. v. David Bernhardt et al. says the Bureau of Land Management failed to comply with the National Environmental Policy Act (NEPA) in renewing Antofagasta’s mineral leases. It also charges that the US Forest Service acted in an arbitrary and capricious manner (in violation of the Administrative Procedure Act) when it reversed course and promoted mine development, despite having previously found that allowing sulfide mining near the Boundary Waters would pose unacceptable risks.

Hopefully this case is going to shed light on the question why Interior rushed to renew Antofagasta’s mineral leases, and at whose direction, and why Secretary of Agriculture Sonny Perdue abruptly cancelled the scientific study of sulfide mining near the Boundary Waters.

While the new documents don’t answer those questions directly, they conform to the pattern we’ve seen in previous document releases. They paint a picture of nearly complete regulatory capture, with Interior officials meeting and working closely with executives from Antofagasta and their Twin Metals Minnesota subsidiary as well as lobbyists from WilmerHale.

There are, for example, records here of a March 6, 2018 meeting and another on March 22nd. Daniel Altikes (the Antofagasta executive I discussed in a previous post) flies up “from Chile” for that one: 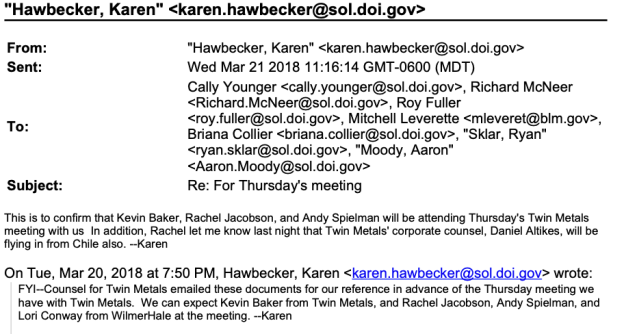 The documents also show Antofagasta/Twin Metals weighing in on what standards of environmental review should apply to the renewal of their mineral leases as well as their preference right lease applications (or PRLAs). According to the meeting summary prepared by Ryan Sklar of the Office of the Solicitor, the mining company recognizes “that there is debate about the type and scope of review that is necessary/appropriate.” Not surprisingly, they would prefer a Categorical Exclusion (CX: meaning the renewal would essentially be exempt from environmental review!), but they will settle for a “limited EA” (which is essentially what they got). 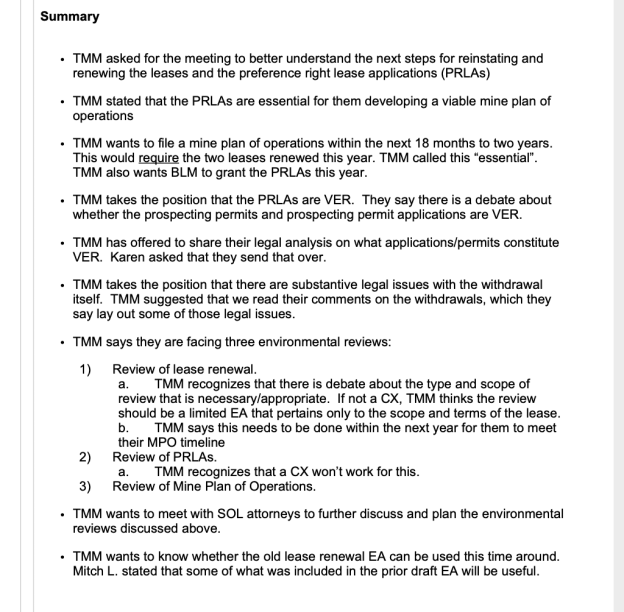 The meeting with Altikes and the lobbyists from WilmerHale on Thursday, March 22nd appears to be the follow up Sklar mentions here. It’s unclear from the documents I have whether there was much debate on that occasion or any dissent in the room at all.