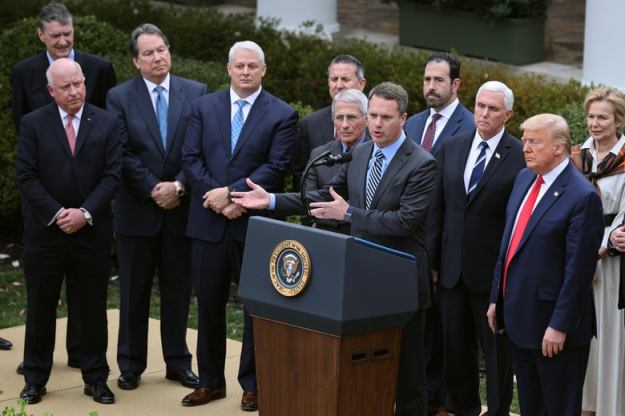 No distancing at Trump’s declaration of national emergency. CEOs are too close for public comfort.

Mike Lindell, better known as the My Pillow Guy, probably cut the most absurd and alarming figure among the CEOs standing with Donald Trump at his March 31st coronavirus press conference. A TV huckster and a religious zealot, Lindell declared from the White House podium that Trump had been elected by God’s grace, and he promised that his “uniquely positioned” and “empowered” pillow company would soon be producing about 50,000 cotton face masks per day. Though Lindell may have come off as a kook, it is hard not to appreciate the alacrity of his business pivot, and there’s no doubt we’ll need more face masks on the market, especially now that the CDC is coming around to the sensible view that masks should be essential wear.

Lindell’s outlandish behavior also draws attention to a disturbing pattern: the administration is trying to outsource the federal pandemic response to the private sector. This was the clear message when Trump declared a national emergency on March 13th, standing shoulder to shoulder with CEOs, not with medical or scientific experts or economists or seasoned administrators who know how to marshal government resources in emergencies. On Slate, Seth Maxon put it bluntly: “Trump Seems to Think a Bunch of CEOs Will Save America From the Coronavirus”; but maybe even that wasn’t blunt enough: Trump and the Trump administration have repeatedly made it clear that the federal government will not and should not lead the public health response; they are so callously laissez faire that they are abdicating the responsibilities of government, or handing the reins of government over to the private sector, while the states scramble for the resources they need.

The pattern has been in place for decades, of course. Now, we are reaping the whirlwind that anti-government ideologues and kleptocratic predators have sown since the 1970s. In some areas, the current administration has simply vacated government offices and diminished the administrative capacity of agencies; in others, they have allowed the private sector to direct and usurp the ordinary functions of federal government; and on nearly every public policy front, they defer to and entrust the public welfare — our common wealth, our public health, and our collective future — to CEOs.

This has been the case from the earliest days of this administration: in February of 2017, for example, Trump signed an executive order that allowed for broad regulatory rollbacks and, in a symbolic and premonitory gesture, handed the presidential pen to Dow Chemical CEO Andrew Liveris. Just one month later, then-EPA administrator Scott Pruitt handed Liveris another gift, when he announced the EPA would not ban the pesticide chlorpyrifos despite clear scientific evidence of its toxicity. Murray Energy’s Robert Murray had even greater influence, presenting the administration with a wish list — “an action plan” — that included pulling the United States out of the Paris Climate Accord and revoking the Clean Power Plan.

After Trump announced his intention to withdraw from Paris, Apple’s Tim Cook, known to the president as Tim Apple, said he could not step down in protest from Jared Kushner’s Office of American Innovation because he’d never joined it in the first place; but in February of 2019, he joined Ivanka Trump’s American Workforce Policy Advisory Board, along with Marillyn Hewson of Lockheed, Ginni Rometty of IBM, Walmart’s Doug McMillon, and Home Depot’s Craig Menear, among others. The board was formed to make sure “all Americans can participate in the opportunities created by the booming economy,” according to the president’s daughter; it’s unclear what they are doing — or if they are doing any policy work at all — now that the boom has gone bust.

Lots of CEOs were sitting on that board with Ivanka and Wilbur Ross.

Where are the policies, now that unemployment is climbing to Depression era levels?

It’s doubtful this board was ever meant to do any serious policy work, or that it could even if it tried. That’s not a knock on the participating CEOs. They may have joined with the best of intentions. There are CEOs today who sincerely want to do more to address social inequities and environmental degradation and are committed to the idea of stakeholder as opposed to shareholder capitalism. These are still aspirations, however, not business requirements, and they will remain aspirations without a major rethink and reorganization of the business enterprise. Meanwhile, CEOs have other, competing priorities, as well as a fiduciary duty to uphold. To the extent they must focus on short-term financial results, CEOs simply do not and cannot act primarily in the broad, long-term public interest — even if sometimes business and the public interest happen to coincide, as they might, at the moment, for Mike Lindell.

The C-Suite is not a public office and the CEO is not the model of public leadership we need.

The notion that success in the private sector makes someone suited for public office has been a source of endless mischief since at least the 1980s. People wrongly consider the president America’s CEO and the presidency a job; CEOs think they can be president; CEOs are celebrated as public benefactors and forward-thinking leaders, but it’s often hard to tell whether they are genuinely public spirited or just command an effective public relations campaign. All that makes a travesty of public service and public office and runs contrary to the public interest.

We should understand how we got to this failed state. That’s largely a story of the CEO’s rise to prominence with the financialization of the economy and of political reaction against broad public welfare schemes. The trend is toward privatizing the republic and hoarding the American future. We are confronted with “a philosophical position,” as historian Heather C. Richardson writes, “embraced by those who would overturn the active government that has presided over the United States since the New Deal.” In response to this attempted overthrow, we have to build a robust alternative, or at least do the work necessary to give future generations a head start on it.