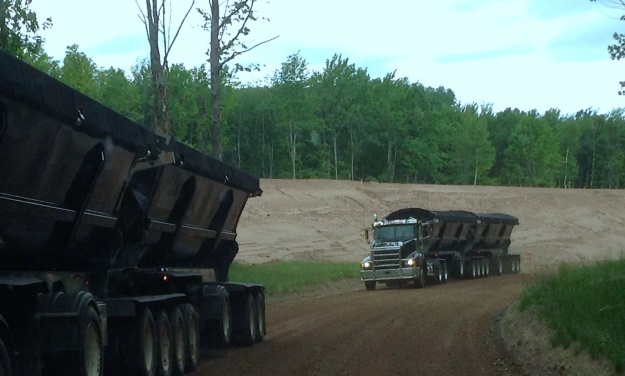 Ore trucks from Eagle Mine.

I’ve been doing my best to keep track of developments in Marquette County Road Commission v. EPA, the litigation over County Road 595 in Michigan’s Upper Peninsula. CR 595 was conceived and planned as a haul route from Eagle Mine to Humboldt Mill. From the outset, the project was a cause of public contention. As plans to cut through wilderness and destroy wetlands to build the road met with objections from the permitting authorities, the companies operating Eagle Mine — first Rio Tinto, then Lundin Mining — stayed on the sidelines, or worked quietly behind the scenes, leaving the people of Marquette County to slug it out with the federal government, and with each other.

The latest entry in the CR 595 legal saga looks like a win for the EPA, or at least a point in its favor. Last week, on Thursday, March 1, Ellen Durkee, the DOJ attorney representing the EPA, submitted a one paragraph letter to the U.S. Court of Appeals for the Sixth Circuit about a Ninth Circuit case called Southern California Alliance of Publicly Owned Treatment Works v. EPA. This is another piece of litigation over Section 402 of the Clean Water Act.

The plaintiff in this case was making an argument similar to that made by Mark Miller, the Pacific Legal Foundation attorney representing the Marquette County Road Commission before the Sixth Circuit: that EPA objections were tantamount to a permit denial (or what Miller insisted on calling a “veto”). If we follow Miller’s argument, the Marquette County Road Commission would have had no recourse after the EPA weighed in on its plans. In administrative legal parlance, the EPA’s objections to the Road Commission’s permit application would constitute “final agency action,” and could therefore come up for review by the court.

But in Southern California Alliance, writes Durkee, “the Ninth Circuit explained that under the statutory scheme, EPA objections are not functionally similar to a permit denial and that a challenge to EPA objections is premature.” That decision, made back in April of 2017, would seem to lend more support to the federal government’s position, that EPA objections merely constitute an “interlocutory step.” There is nothing final about them at all. So when it came to the permit application for CR 595, the Michigan DEQ still had three options: grant, deny, or do nothing. This was a point Judge White highlighted when she questioned Miller about the word “veto” during oral argument before the Sixth Circuit.

Update: A Decision. On March 20th, 2018, the Sixth Circuit agreed with and affirmed the district court’s decision to dismiss the Road Commission’s complaint. Miller’s argument that EPA objections were tantamount to a “veto” and constituted final agency action failed to win over the three judge panel. “Though the Road Commission characterizes EPA’s objections as a ‘veto,’ the facts show that EPA’s objections did not end the Road Commission’s pursuit of a Section 404 permit. To the contrary, when EPA lodged objections, the permit review process continued precisely as directed by statute.” Given what I say here about Southern California Alliance, this looks like the end of the road.

Another Update. 9 April 2018. A story by Cecilia Brown in the Mining Journal suggests this case may take yet another turn. Dissatisfied with the March 20th decision by the three judge panel, the Road Commission is now asking for an en banc hearing at the Sixth Circuit. And if that doesn’t work out, they have “authorized” the Pacific Legal Foundation to seek review at the Supreme Court. For reasons I suggest above, I think it’s unlikely the Supreme Court will grant certiorari (or review the case). So far as I can tell from the docket, the Road Commission had not yet filed a petition with the Sixth Circuit requesting en banc review.

Yet Another Update. On May 2nd, Michael J. Patwell of Clark Hill , PLC and Mark Miller of the Pacific Legal Foundation filed a petition for an en banc hearing at the Sixth Circuit. This would bring the Road Commission’s case against the EPA before all the judges in the Circuit, and ask them to revisit the March 20th decision by the three judge panel.

The petition acknowledges that “this Court rarely rehears a case en banc” but then tries to argue that this case involves “an exceptionally important question of federal jurisdiction.” Oddly enough, the petition does not back down from the argument that EPA objections to the Road Commission’s permit “crystalize into what amounts to a veto” — an argument the Sixth Circuit panel met with skepticism at the hearing, then explicitly rejected in its opinion. So an en banc hearing at the Sixth Circuit would seem unlikely.

Petition for En Banc Hearing Denied, 29 May 2018. Today, Beverly L. Harris, the En Banc Coordinator for the Sixth Circuit, notified Mark Miller of the Pacific Legal Foundation that his petition for an en banc hearing has been denied. This comes as no surprise. The original three-judge panel found no fault with their decision, observing that “the issues raised in the petition were fully considered upon the original submission and decision of the case. The petition then was circulated to the full court. No judge has requested a vote on the suggestion for rehearing en banc.” As I noted back on April 9th, there are reports that the Marquette County Road Commission has authorized Miller to pursue this matter to the Supreme Court. After not a single judge took Miller up on the en banc review, it seems unlikely that the nation’s highest court would find anything irregular or meriting review here.

Mandate issued. On Thursday, 7 June 2018, the Sixth Circuit issued a mandate in MCRC v. EPA. This suggests, among other things, that Pacific Legal Foundation’s Mark Miller did not seek a stay of mandate — which he might have done were he ready to petition the Supreme Court.

2 thoughts on “A Quick Update on MCRC v. EPA at the Sixth Circuit (With Several Additional Updates)”