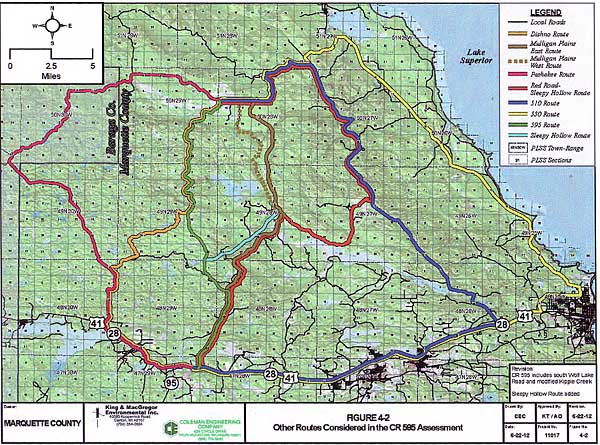 In remarks before the Sixth Circuit Court of Appeals on Wednesday, Mark Miller of the Pacific Legal Foundation waved the flag of “cooperative federalism,” complained that the Environmental Protection Agency has “gone way beyond the powers that Congress gave them,” and even, at one point, raised the familiar spectre of an anti-mining conspiracy at the EPA and the Army Corps of Engineers.

They did not want a permit here from before. In the pre-application process, there was a meeting, among the parties — not among Marquette County Road Commission, they were not invited — but the government said we are not going to approve this road project. This was a well-known proposed road project from a mine to a mill, and the EPA and the Corps wanted none of it. So that’s why it was futile factually.

Miller has elaborated on these arguments in the Wall Street Journal and elsewhere. As I have suggested in previous posts on Marquette County Road Commission v. EPA, grandstanding arguments like these are intended to raise the profile of this dispute and make it about much more than a haul road. They have been used, repeatedly, to connect the Road Commission’s case with a larger, coordinated effort — a right-wing, dark-money political project — to sideline federal regulators in Michigan and weaken enforcement of the Clean Water Act; stifle local environmental watchdogs; and arrogate the authority and power to direct economic development in the Upper Peninsula to a set of undisclosed actors.

But on Tuesday, those arguments didn’t count for much in Miller’s presentation before the Sixth Circuit panel. At the center of the dispute is still the question whether EPA’s objections to CR 595 constitute “final agency action,” as the Road Commission claims, or if they are an “interlocutory step” (in which case, the Road Commission can still take the EPA’s objections under advisement and go back to the Corps with a proposal).

Miller claimed right off the bat, in the very first sentence of his argument, that EPA’s objections were tantamount to a “veto.” I’ve written about this argument before. On Tuesday, the judges wanted to know what exactly Miller meant by that word. “You keep saying the EPA vetoed the application for the permit,” asked one of the judges just four minutes into the proceedings. “What do you mean by that?” Ten minutes later, another Judge indicated she was still not satisfied on this point:

JUDGE: What makes it — you keep using the word veto.
MILLER: Yes, your honor.
JUDGE: But it was really objections, right?
MILLER: Your honor I think that’s a distinction without a difference because effectively here the EPA has twice said, “no, DEQ, this permit you’re ready to issue is not good enough for us.” And the reasons the EPA was giving were not within its powers to give. Then the EPA knew it was taking advantage of the statute to say well now it’s going to bounce to the Corps.

That there is no “difference” between objections and vetoes is critical to Miller’s argument for futility, which claims it would be a “farce” for the Road Commission to go back to the Corps.

When it came to her turn, Ellen Durkee, arguing for the EPA and the Army Corps, pursued the point:

I’d like to speak to this issue of this continued use of the word “veto,” because I think that that is, seems to be the critical characterization for the plaintiff’s argument here. A veto means that you cannot get a permit. In [Section] 404 [of the Clean Water Act] itself, there’s a distinction between what happens in 404j with EPA objections and a true veto, and you know they — in this case, the EPA objection gives the state opportunity to take action. And then when the state, as it did here — there’s an impasse, because they didn’t take action within the statutory time, it simply shifts the permitting authority. That is not a veto. The Corps may look at this and say we think it’s satisfactory. EPA, you know, they may come up with the provisions that they need to satisfy that, the objections, in which case they could still get a permit. What [the Road Commission] simply did was stop the process and decide not to continue.

And the word “veto” was still begging questions at the end of the proceeding, when Judge Helene N. White went back to Miller.

JUDGE; Let me just ask you this question. Once the EPA made its objections, the DEQ still had three options, correct?
MILLER: Yes your honor.
JUDGE: And they were grant, deny, or do nothing.
MILLER: In this case the DEQ threw its hands up because they could never — if they granted the permit, the landowner would have nowhere to go because the EPA made it clear it was not going to sign off on it. So they deny it and then transfer– they threw their hands up because the reasons the EPA gave were improper under the statute.
[Crosstalk.]
MILLER: Yes, your honor.
JUDGE: Ok. Did they have three options? Grant, deny, or do nothing?
MILLER: Your honor, they had the options, but ultimately once the EPA gives arbitrary and capricious objections they really had no choice.
JUDGE: But they could have said, they could have denied the permit, right? They could have said we are honoring the objections and we deny the permit.
MILLER: Right and they didn’t, your honor, respectfully they didn’t.

You can listen to the whole proceeding here, or read my (imperfect) transcript of the proceeding.

4 thoughts on “MCRC v. EPA at the Sixth Circuit”