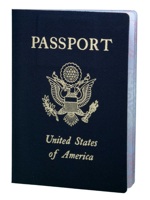 I bring my passport with me as a matter of course when I travel, and I will have it with me when I go to Arizona in a couple of weeks. I don’t plan to cross over to Mexico, but I consider it prudent to have my papers always in order. And it seems especially prudent now under the new Arizona law.

There’s not much chance I will arouse suspicion. My features are unmistakably Mediterranean, Southern Italian, Neapolitan: walk the Spaccanapoli or the streets of Fisciano and you will see versions of me everywhere, people who could be cousins, sisters, brothers, uncles, aunts. There are people who look like me (and who share my last name) in Buenos Aires, Argentina and Sao Paolo, Brazil, too; but those faces simply tell the story of European migration to the Americas.

Still, a rich and pampered woman from Connecticut, the wife of an acquaintance, once mistook me for a waiter when I attended a party at a restaurant where the staff was almost entirely Hispanic; another woman, much the same type, remembered me as one of the Mexican counter staff at a café in Berkeley where I used to study. Mistakes have been made.

And it’s only recently in American history that my heritage allows me to claim that I am one of us rather than one of them. The largest mass lynching in American history took place in New Orleans, in 1891, where 11 Italian immigrants were strung up for their role in murdering New Orleans police chief David Hennessy. (These 11 were convicted after a city-wide sweep in which 250 Italian immigrants were arrested.) At the time, and up until the First World War, Italian immigrants were associated in the popular mind not just with organized crime (as they still are) but also with political anarchism; nativists thus stood for the rule of law and against the lawlessness immigrants brought to our shores, and for linguistic purity and an unhyphenated American identity. Teddy Roosevelt spoke of Southern European immigrants in many of the same disdainful terms Arizona politicians today use to describe the invading Mexican hordes.

Which is not to say there is not a real problem with illegal immigration in Arizona. It’s just that we’ve been here before, at a moment when the country was undergoing a demographic shift on the order of the one it’s undergoing right now. By 2050, the Hispanic population is expected to double from 15 to 30 percent — one third — of the American population.

Frank Rich rightly points out in his column today that the anger in Arizona, and around the country, is not just about illegal immigration, but a “nativist apoplexy” that afflicts the very same people who consider President Obama “Illegal Alien No. 1”. Rich cites Rush Limbaugh, who, after the President made comments critical of the Arizona legislation, offered this clever little quip: “I can understand Obama being touchy on the subject of producing your papers. Maybe he’s afraid somebody is going to ask him for his.”

Limbaugh knows how to play on the feelings of disenfranchisement, both political and economic, that make the trouble in Arizona about more than race, more than ethnicity, more than changing demographics. Still, Rich is on to something, and I read today’s editorial with more than my usual interest, because I have been grappling in my own mind with the question whether, despite my work commitments, I should somehow support or respect the calls for a boycott on Arizona.

Rich makes the point that such actions are likely to prove futile, because the “virus” has already spread beyond Arizona, or was never confined to Arizona in the first place: “Boycott the Diamondbacks and Phoenix’s convention hotels if you want to punish Arizona, but don’t for a second believe that it will stop the fire next time.”

So maybe a boycott won’t change the fact that we all live in Arizona now. The question is what sorts of engagements, political and economic, will.